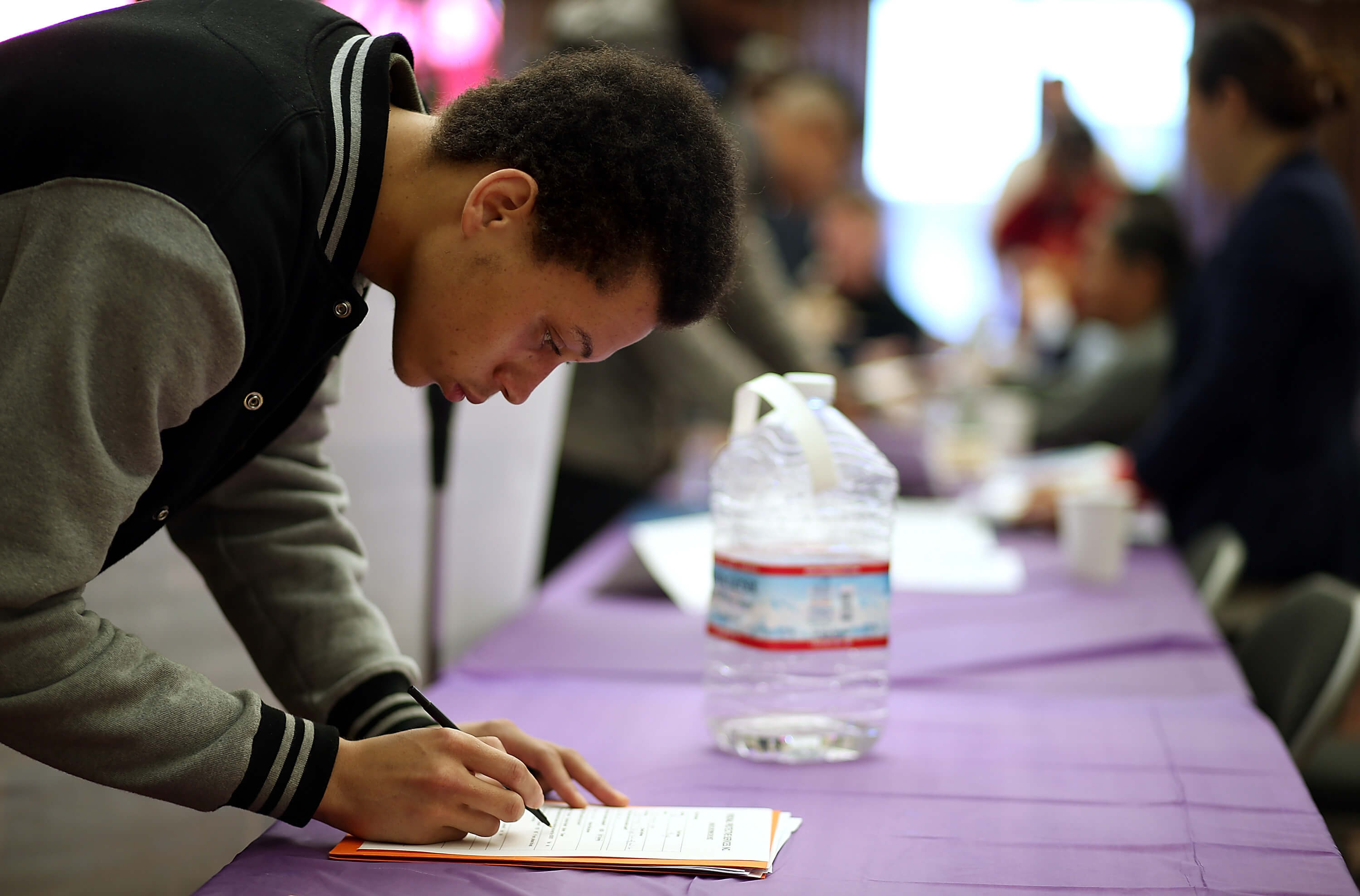 SAN FRANCISCO, CA - MAY 21: A job seeker fills out an application during a career fair at the Southeast Community Facility Commission on May 21, 2014 in San Francisco, California. Job seekers came out in force looking for employment from nearly 40 employers at the second annual job and career fair in San Francisco's Bayview district. California's unemployment fell to 7.8 percent in April, down from 9.1 percent in April of 2013. (Photo by Justin Sullivan/Getty Images)

The Ban the Box movement

Ban the Box was started in 2004 by a civil-rights group for the formerly incarcerated called All of Us or None. The movement’s primary goal is to reduce employment discrimination of ex-offenders by eliminating the box on initial applications that asks for criminal record and encouraging employers to focus on other factors beside record during the hiring process.

The movement appears to have had a significant and widespread impact.

Nationwide, 150 cities and counties have adopted policies restricting criminal record inquiries early in the employment process, according to the National Employment Law Project. NELP calculates that almost two-thirds of the nation’s total population (around 211 million people) now live in jurisdictions with Ban the Box or similar restrictions.

The Equal Opportunity Employment Commission created a 2012 update to its policies, which provided an outline of how to avoid discrimination against those with records. And in 2015, former President Barack Obama established a regulation that directs federal agencies to postpone inquiries about criminal history until later in the hiring process.

After the District of Columbia passed a fair chance hiring law, there was a 33 percent increase in the number of applicants with a record hired. In Durham County, North Carolina, the number of applicants with records recommended for hire nearly tripled in the two years after its BTB policy passed, and an average of 96.8 percent of those recommended ultimately got the job.

What research has disagreed on is whether BTB has been as helpful to minorities with criminal records as it has been to white offenders.

A national analysis of hiring data compared cities with and without BTB legislation and concluded that the areas with this legislation reduced the probability of employment by 5.1 percent for black men and 2.9 percent for Hispanic men aged 25-34 without college degrees (the portion of the population most likely to have been incarcerated).

And a study specific to New Jersey and New York sent in thousands of fake job applications before and after BTB legislation to find out whether BTB had resulted in more disparity for minorities. The study found that before BTB, white applicants aged 21-22 received about 7 percent more callbacks than similar black applicants of the same ages — and after, the gap jumped to 45 percent. It is important to note that the gap was not due to fewer callbacks for black applicants than before the legislation but rather less of an increase for them as compared to the white offender population. It is also worth pointing out that the gap between callbacks for black and white applicants was much more significant in New Jersey than New York, the latter of which implemented a law against discrimination based on criminal record in 1977.

Both of these studies have been criticized for their focus on specific age and education-related groups as well as their apparent conclusions that the BTB legislation was what led to the increased disparity for minorities, when it may be more appropriate to look at ongoing employer discrimination against minorities rather than attribute the issue to legislation that did increase opportunity for ex-offenders overall.

Though research reports disagree, the results indicating racial disparity should not be ignored as a possibility. If the studies’ conclusions are correct, then they indicate that employers might be opting to screen out minorities as an alternative to asking for criminal record information because they are trying to block those most likely to have a criminal record from employment.

However, blaming Ban the Box for the potential increase in racial disparity is completely counterproductive. The legislation has been successful in helping the overall offender population and should continue to be adopted across the nation.

So, to move forward as states and cities continue to adopt fair-hiring legislation and support ex-offenders, racial disparity will have to be looked at as an ongoing issue. In order to be comprehensive, reform needs to increase legal accountability on employers for racial discrimination in all steps of the hiring process.