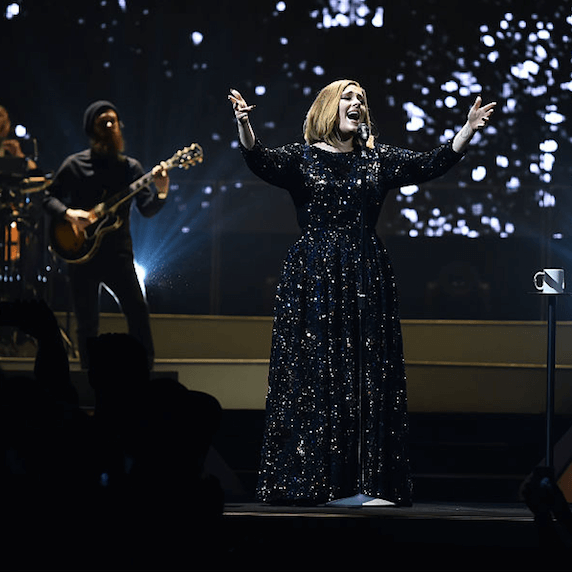 Would it surprise you to know that there are 83 different GRAMMY Awards given out each year? The categories range from those you might expect like Song of the Year to Best Spoken Word Album (which is why presidential candidate Hillary Clinton and President Barack Obama are both GRAMMY Award winners).

Most of the awards are actually given out before the star-studded telecast. In fact, the GRAMMYs give out fewer awards live on air than any other major awards show.  The televised version has been refined over the years and honed into a celebration of live performance that often creates unique opportunities for duets and memorable, larger-than-life performances from both rising stars and icons.

That’s not an accident, it also happens to be a brilliant way to attract viewers and sell more music. In fact, in 2015, post-GRAMMY week sales were 87 percent higher overall than the previous two weeks.  Here’s a look at how the GRAMMY Awards impacted record sales in 2016 and historically.

Arcade Fire and Dixie Chicks: Album of the Year

Album of the Year, undoubtedly one of the biggest and most prestigious awards of the night, tends to be a guarantee of a huge sales boost. Over the past ten years, the winner of this category consistently saw a significant increase in sales — especially for artists not already on the top of the charts.

When Arcade Fire, an indie band many mainstream music fans weren’t familiar with, won Album of the Year a year in 2011, many Twitter users took to social media to discuss the fact that they hadn’t heard of the band. However, it’s clear the exposure that came with the award had a huge impact on their popularity; they experienced a 238 percent increase in sales. Similarly, after much controversy and outright boycotts, The Dixie Chicks’ Album of the Year win in 2007 led to an impressive 714 percent increase in sales and their song jumped to number four on the charts — making it their most popular single to date.

While the award can be a career-changing moment for lesser-known artists, it still leads to record sales for even the most popular of musicians. Swift’s record-setting album “1989” won this year but only had a 91 percent increase in sales. That number becomes more impressive when considering the album was already the fastest selling album since 2004, with more than five million records sold. Similarly, when Swift won in 2010, she only experienced a 58 percent increase in sales.

Andra Day to the stage, please: Performance and sales

This year’s big winners in sales prove that performances, with or without award wins, can lead directly to big sales bumps. This year’s biggest sales increases were Andra Day, Gwen Stefani and Alabama Shakes; two out of the three didn’t win any awards, while all three performed in some manner.

Day had the biggest overall sales increase of any artist despite not winning any awards. She did perform with Ellie Goulding, demonstrating that performances can be just as, if not more, powerful as a win. Similarly, Adele’s album was released too late to be nominated this year, but her performance lead to a 21 percent increase in overall sales, putting it back at the top of the charts, and the song she performed, “All I Ask,” saw a 526 percent increase.

Gwen Stefani also didn’t have any nominations, but her innovative live music video commercial with Target lead to a 275 percent increase in sales, the second biggest increase of any artist. Alabama Shakes, who both won and performed, had the third largest increase, 239 percent, of any artist  The connection isn’t limited to sales though, there were similar results for streaming services, where Alabama Shakes and Andra Day respectively saw the two largest increases.

According to Twitter, Ed Sheeran’s win of Song of the Year was the most-tweeted moment of the night. It seems like that positive reaction can be linked to an increase in sales, “Thinking Out Loud” saw a 249 percent increase in sales.

The second-most talked about moment on social media was Kendrick Lamar’s performance. Lamar was also the most-nominated artist of the night and won five awards. His album had a 229 percent increase in sales and “Alright” — one of the songs he performed — went up 645 percent.

The third-most tweeted moment was Meghan Trainor’s win of Best New Artist and she saw a 29 percent increase in sales.

The link between GRAMMY nominations and music sales has been present since the start of the awards. It’s no surprise that this eventually lead to a telecast that focused more on impressive performances and less on trophies. As such, artists and their record labels can feel confident that a chance to perform on the GRAMMY stage or win one of the most prestigious awards — like Album of the Year — is a catalyst to see a big increase in sales.

Perhaps more interestingly, this year’s awards demonstrate that performance can be more valuable as a promotional tool than an actual win and that social-media-worthy moments can also be linked to increased sales.

Ultimately, it seems one of the best way to succeed in post-GRAMMYs sales is by using it as an opportunity to capture attention by being bold and creative — which is exactly what the GRAMMYs were intended to celebrate.

Bold @BoldTV
6 hours ago
With #Saweetie having her own meal at #McDonalds. Do you think this is the right move? Or are they just copying the same idea they had with #Travisscott? Can Travis Scott Save McDonald’s? - https://t.co/lHqcxrqRLV
View on Twitter
1
2