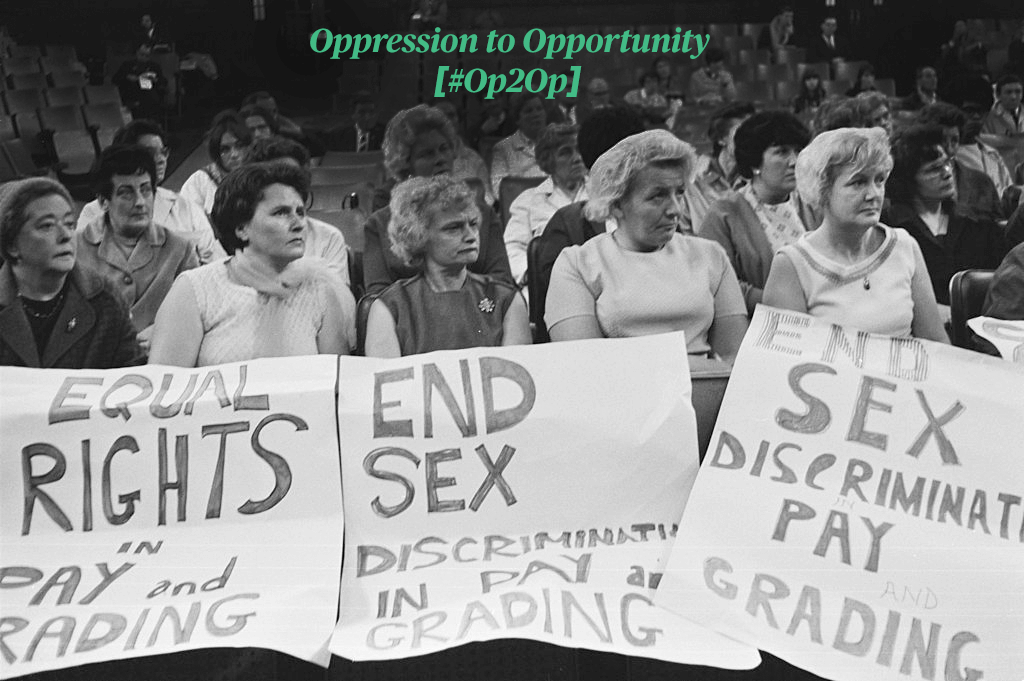 Designed to eradicate gender-based discrimination in the workplace and bridge the stubborn wage gap, the Equal Pay Act now serves as a leering, 21-cent reminder of our limitations as a society.

Seldom enforced, this first calculated effort to outlaw sexist workplace policies was ultimately overshadowed by unconscious gender biases in our society – biases that are still present and effectual today.

Should we continue to progress at this sluggish rate, we can expect the remaining 21-cent gap to close in another 53 years, when millennial women are (hopefully) retired.

Officials point to “limited enforcement tools and inadequate remedies” as reasons behind the legislative failure. We, however, detect a chasm between the economic realities imbedded in this 21-cent statistic and society’s acceptance of what those realities entail.

This infamous 79-cent figure, and the gender wage gap more broadly, only reentered our cultural lexicon in the past three years or so, surfing third-wave feminism into mainstream significance.

Once it became clear that we haven’t, in fact, reached equality for the sexes, that progress isn’t inevitable and that real social change requires more than just political correctness written into law, gender equality graced America’s political and social consciousness once again.

By spotlighting the harsh realities of gender “equality” in America, we hope to move past denial, into acceptance and towards true equality for the sexes.

A long, sordid past

The seeds of gender inequality in the workplace were first planted during World War II, when a sweeping military draft resulted in African Americans and women entering the paid workforce for the first time.

Although this kickstarted the careers of many American women, it also set the stage for decades of wage inequality in the United States. African Americans and women were offered the highly coveted positions once reserved for white men, but at half the salary.

Sensing an issue, the national War Labor Board urged employers in 1943 to “voluntarily make adjustments which equalize wage or salary rates paid to females with the rates paid to males for comparable quality and quantity of work on the same or similar operations,” according to Re:Gender, a feminist membership organization and research group.

Unsurprisingly, this voluntary request went largely unheeded, and wage inequality continued well into the ‘50s and ‘60s, when women earned roughly 50 cents to every man’s dollar.

Job advertisements were separated by gender during this time, reserving the high-paying executive and management positions for men. Occasionally, the same job opportunities ran under both the male and female listings — at different salary points.

The 1970 case outlawed the practice of changing the job titles of women in order to pay them less, while the 1974 case removed the “going market rate” for women, which was often used as an excuse to pay them less than men for doing the same work.

A woman’s place is in the kitchen

Despite these legislative efforts, the same wage gap that thrived during the “Mad Men” era still persists today. This is due in no small part to the disparate gender roles and ensuing social norms that also characterized this time period.

When it comes to issues like wage growth and career advancement, categorizing men as breadwinners and women as caretakers, however unconsciously, can become problematic.

“A male employee is considered a breadwinner who should be valued – even above his pay grade – where a woman is at many turns a liability,” said Forbes staff writer Meghan Casserly when reflecting on the “subtle sexism at play” when hiring or promoting men versus women.

This double standard is exacerbated after starting a family, when new mothers’ pay often suffers due to the assumption that they’ll be “less committed to work.” Conversely, new fathers often get a pay bump to compensate for the financial burden of a child.

“Across industries and education levels, [this bias] shows in their paychecks,” concludes Casserly.

Other aspects of the gender wage gap aren’t nearly as latent or difficult to pinpoint.

It’s been proven that women are more likely to go into less lucrative fields, such as education and psychology, while men dominate the high-paying science, technology, engineering and math fields (hello, Silicon Valley), according to NPR’s Lisa Chow.

Chow quotes Georgetown University economist Anthony Carnevale, who suggests that when choosing a college major or a career path after graduation, “women often make decisions that lead them to earn less than they otherwise might.”

This alludes to a sort of “education gap” between the genders – a disparity that just so happens to statistically play into the hands of men as well.

According to the 2015 STEM Index, interest and employment in STEM fields has increased in the last few years, but the gap between women and men remains “deeply entrenched” and has even widened in some cases.

As our labor market shifts to match our increasingly tech-based economy, it’s imperative that we follow the lead of the Office of Science and Technology Policy and continue to encourage women to enter the more lucrative STEM fields.

“Women in STEM jobs earn 33 percent more than those in non-STEM occupations and experience a smaller wage gap relative to men,” reads their website.

“Increasing opportunities for women in these fields is an important step towards realizing greater economic success and equality for women across the board.”

Setting the bar for inequality

Past gender discrimination in the workplace has even shaped female expectations upon entering the job market.

Employer branding firm Universum found that when questioned about their earning potential at their very first job out of college, female students consistently predict an annual starting salary roughly $7,000 less than that of their male classmates in the same field, according to their 2012 student survey.

What’s worse, these estimates are pretty on par with the economic realities for entry-level females, suggesting that this so-called “anticipation gap” can have a hand in jumpstarting the wage gap before a woman even enters the workforce.

“I tell my graduate students that by not negotiating their job at the beginning of their career, they’re leaving anywhere between $1 million and $1.5 million on the table in lost earnings over their lifetime,” said Carnegie Mellon economist Linda Babcock as quoted by NPR’s Jennifer Ludden.

This undervaluation statistically continues throughout women’s careers. Men are four times more likely than women to ask for a raise, which has a powerful “snowball effect” on lifetime earnings, said Babcock.

“Even a small pay boost will mean bigger annual raises and possibly bigger bonuses and it will carry over to a new employer, who is almost certain to ask: ‘What was your last salary?’”

Feminism for the 21st century

These social, economic and cultural realties paint a bleak picture for women in the workforce. But with acknowledgement comes responsibility, and with responsibility comes change.

From redefining the word “feminism” in the 21st century to politically filing “women’s issues” under “everyone’s issues,” we’ve gradually moved towards a more inclusive view of gender equality.

We’ve found a modern-day Gloria Steinem in actress and equal rights activist Emma Watson, a role model in Sheryl Sandberg and a brave older sister in Jennifer Lawrence, who penned a provocative essay about her experience with the wage gap in Lena Dunham’s Lenny Letter.

Behind the scenes and out of the harsh spotlight of celebrity, we have women like Georgene Huang and Romy Newman of employer review site Fairygodboss, who’ve created a safe and anonymous online space for women to talk business.

There are the women of Ellevate Network, a networking community of over 34,000 women globally, who have been working to connect, encourage and inspire female professionals since 1997.

Perhaps more importantly, these efforts have forced Americans to take a long, hard look in the mirror. Despite years of activism, millions in federal legislation and mountains of incriminating data and research, we still haven’t reached true gender parity.

By challenging the idea that a woman’s place is in the kitchen, calling bullshit on the 21-cent wage gap and refusing to accept that a woman’s work is somehow worth less than a man’s, we’re in turn accepting our own reality as an imperfect nation.

We’re accepting the challenge to break down barriers, confront the uncomfortable and view men and women not as executive and housewife or blue and pink, but as humans. Let our acceptance be the catalyst to move up – twenty-one cents up, to be exact.