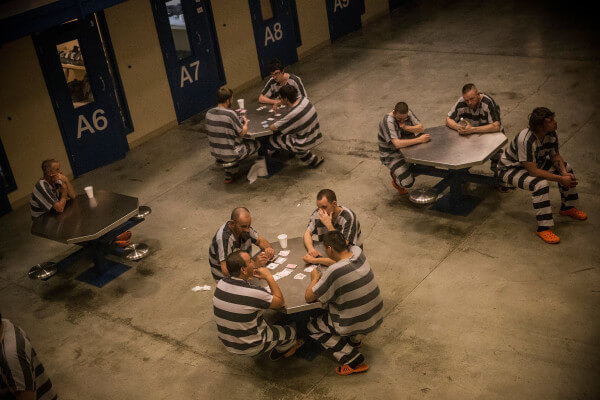 four prisoners sitting around a table from a birds-eye view.

We all pay for mass incarceration. But those in or formerly in the criminal justice system can find their finances completely drained by the process.

From the time someone is arrested and requires a lawyer, to the day they are released with housing or employment, the criminal justice system can cost thousands of dollars – and when former inmates are released, they can sometimes be left so financially crippled that they end up right back in jail.

The arrest: Loss of income and court fees

When someone is arrested, it can cost them big right off the bat. They are held in jail unless they can afford to pay bail to be released, which is often set high enough that this is impossible. The average cost of bail for a felony is $55,400, according to a 2009 study.

Even when the bail is lower, it is still regularly out of reach for low-income arrestees and their families. A 2013 of New York City jail data found that more than 50 percent of jail inmates held until case disposition were in jail because they couldn’t afford bail of $2,500 or less. Most of these were misdemeanor cases.

When someone is unable to pay their bail, they are held in jail until trial, which takes a national average of three to four months, according to the Pretrial Institute of Justice. Some states have a longer average; in New Jersey, it takes an average of 10 months before someone gets a trial.

Staying in jail for this long regularly costs arrestees their jobs and their housing, while it costs the state X amount of dollars to house them. Effectively, the state is paying to destabilize citizens and remove them from the workforce.

The incarceration: Household items in prison, visiting and communication

Once in prison, inmates must purchase everything aside from basic food items, including: hygiene items, snacks, postage supplies (to write letters), writing materials, vitamins and other personal items

This is generally difficult for inmates to afford because most are completely unemployed, and those that do quality for in-prison work make an average of 92 cents an hour. They can get money sent from their families to pay for these things, but it can also be difficult for the family to pay because they lost the income of the inmate.

Further, any money they send will have fees tacked onto it by private companies. For example, JPay tack fees onto any money sent by families, usually around 35 percent and sometimes as high as 50 percent.

Then, in order to communicate with their families via phone, they must pay huge fees that are also decided by private companies. These fees were reaching as high as $6.95 for 15 minutes in some states until the Federal Communications Commission capped it at $1.65 last year.

The release and lasting debt of incarceration

When an inmate is released, it can be extremely difficult to find employment, as many employers will disqualify anyone with a criminal history. With no income and with a negative background check, former inmates are often unable to find housing and pay for food and health needs.

A 2015 study by the Ella Baker Center revealed that the average debt incurred for court-related fines and fees is $13,607. For an inmate unable to find work, this can leave them and/or their family financially crippled for the rest of their life.

Many will say that it is a person’s choice to commit a crime, be arrested and have to pay a significant financial burden to go through the criminal justice system. But, these costs signify the problems in the system as a whole.

After analyzing the financial burden of incarceration, the Ella Baker Study concluded that all states should restructure their policies to reduce and modify sentences for crimes. The money that can be saved from doing this could be invested in substance abuse programs, stable housing and other programs, which are proven to reduce recidivism rates by focusing on rehabilitation.

Additionally, the barriers in place that prevent former inmates from finding employment and housing need to be reformed because they prevent rehabilitation and further bankrupt families of inmates, causing a cycle of incarceration that costs our system tens of billions a year.

Only through comprehensive criminal justice reform can we hope to stop the cycle and see former inmates be rehabilitated into society and remain out of jail.

In this article:mass incarceration, prison system