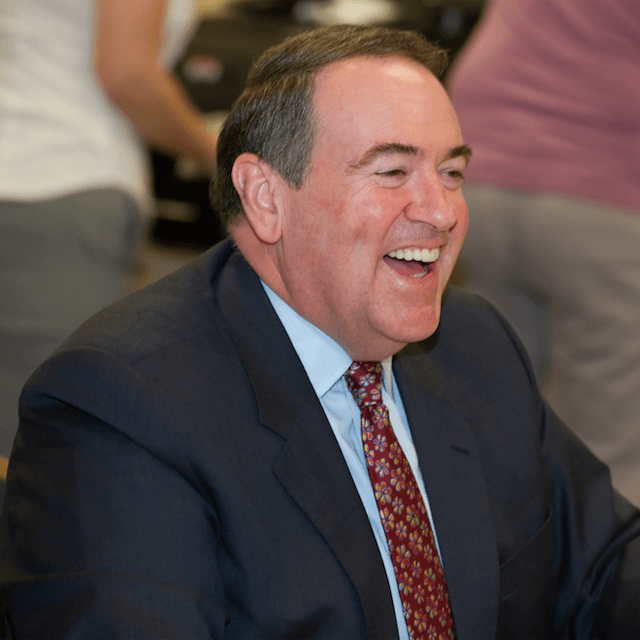 Huckabee in full flight on the campaign trail. Source: Shutterstock

Yesterday in our preview of the GOP debate, we laid out our hopes that, amid all the talk on bombs, no-fly zones and terrorists, candidates would discuss their job-growth plans for millennials. Then, in the undercard debate, our resident Huckster laid out his program to get millennials back to work: sending our entitled asses to wage war in the Middle East. Ask and ye shall receive, I guess?

When CNN’s Wolf Blitzer asked the former Arkansas governor about his plan to defeat the terrorist group, General Grits’N’Gravy’s answer managed to interweave “strength,” “jobs” and “kids these days” – the “Holy Trinity” as far as his geriatric gaggle is concerned.

“We have to get our military rebuilt from the ground up and all over America I hear young people say, ‘Would you tell me what you’re going to do? Would you give me free college? Will you make sure that I can have medical marijuana?'” Huckabee said, implying that he’s spoken to a person under 70 in the last calendar year.

“You know what I think?” No thanks. Cut. Can we cut? No? Alright then…

“We aren’t going to give you anything! We’re going to give you the opportunity to get off your butt and serve your country and secure your freedom, because if you don’t, nobody else is!” he triumphantly concluded.

Of course, Huckabee was regretfully unable to serve in Vietnam back in the day because the only thing flatter than his taxes are his feet.

Still, this apparently wasn’t enough to convince him that an appropriate jobs program may include items like private sector technology growth or education reform that allows Gen Y to fill the massive labor shortage in health care. Because Nana isn’t going to hook herself up to that respirator, is she?

Do I think medical marijuana should be legal? Yeah, I mean it provides relief to critically sick people, but you should also know that it’s not the total encapsulation of my life’s hopes and dreams.

Do I have expectations for the next president to find meaningful ways to engage millennials in the work force? Guilty as charged. I thought this was part of the president’s job description, but I missed a few civics classes along the way.

Do I call my grandparents enough? Probably not. But I am, perhaps foolishly, confident that my every-other-week average is enough to keep them from wishing for my deployment.

All jokes aside, I do think Gen Y owes Huckabee gratitude for explaining to our lazy asses what the real American Dream looks like. Some day, as your arthritic fingers creak while shoveling cholesterol-covered carbohydrates between your dentures at Bingo, you’ll receive a postcard from your grandchild, smiling sweetly with an assault rifle in some godforsaken country. And you’ll get it.

Bold @BoldTV
6 hours ago
Should those students be vaccinated before they go back to school? 🏫