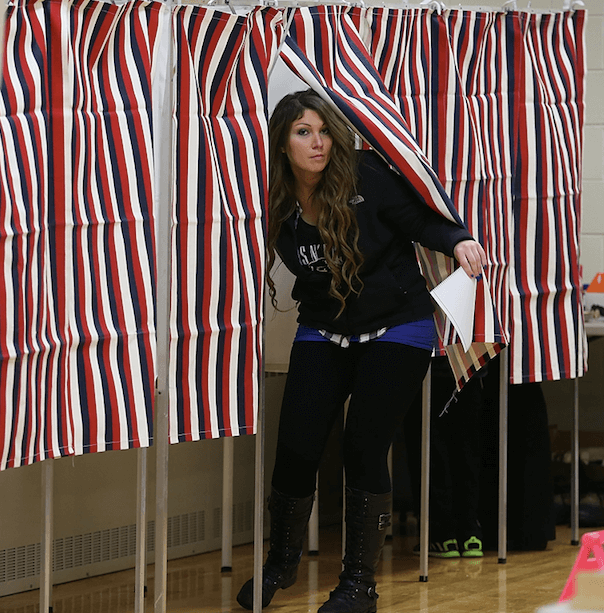 The Millennial vote the potential to have a greater impact on the 2016 election than any race before. The question is, will they show up at the polls?

In 2015, Millennials – people 18-to-34 years old – became the most populous generation of voting age, overtaking the previously most populous Baby Boomers. By 2028, there are expected to be about 15 million more Millennials than Boomers or Gen-Xers.

When Pew looked at the numbers of people 18-to-35 years old who were eligible to vote, that number (69.2 million) was roughly equivalent to the number of eligible Boomers (69.7 million). Each of those generations accounts for about 31 percent of eligible voters.

Hear that? Millennials comprise one-third of the electorate in the United States. By sheer numbers, their impact at the polls could be massive.

The other numbers that count

Census Bureau data for voter turnout in previous presidential elections shows that, historically, young adults tend not to wield their power at the polls.

Voters aged 18-to-44 have consistently been less present at the polls than older voters since the 1970s. Turnout rates for the youngest eligible voters, between 18-and-24 years old, have been fluctuating between the low 30s and mid-40s percent-wise, and 25-to-44 year olds hugged around 50 percent turnout rate in the last five presidential elections.

What’s all that mean?

Young voters make up a significant portion of the electorate, but they are disproportionately unrepresented on Election Day. That kind of sucks for the whole “democracy” concept.

Also – how to put this delicately – young folks are going to “be around” longer than older ones. We’ll have to live with the consequences of elections longer. We should probably have a hand in the outcome, then.

It’s not uncommon to hear young adults say that they don’t think their votes would matter. Many are disillusioned with the political process – attested to not only by low voter turnout among the demographic, but lower rates of affiliation with political parties. And since the two-party system in the United States makes it damn-near impossible for a non-major-party candidate to win, at least on the presidential level, why bother?

Here’s the thing. Major parties won’t change to incorporate the interests of young voters unless they know that young people will go to bat for their interests with the ballots they cast.

This means voting for candidates you actually want in the primaries, so you have a say in who’s on the ballot in the general election. It means voting third-party or independent if such a candidate represents your values, both to bolster the presence of those values in the political process and to make it clear to major parties when they are missing the mark.

It also, crucially, means voting in state and local elections. Governors, members of congress, state senators, state representatives and city councils shape local, state and federal policy. Those offices hold primary elections as well, which determine who has a chance to go on to fill these positions.

There is evidence that voter turnout impacts the policy decisions that lawmakers support. Sean McElwee of the Demos Institute, a left-leaning think tank, compiled research showing that politicians do indeed tend to support policies in line with their main voter bases’ interests.

For example, when wealthy people have higher turnout rates within a state, the state tends to have greater income inequality, a lower minimum wage and less social welfare spending.

Given their numbers, Millennials could be a powerful voting bloc, putting pressure on candidates to represent their interests and politicians to act on them. If, if, they become a voting bloc by, well, voting.

If young voters turned out en masse to primary, down-ballot and presidential elections, their votes would matter, on all levels of government. Millennials may tend to feel that government does not represent their interests, but it’s far less likely to do so if young adults don’t wield the power of their vote.