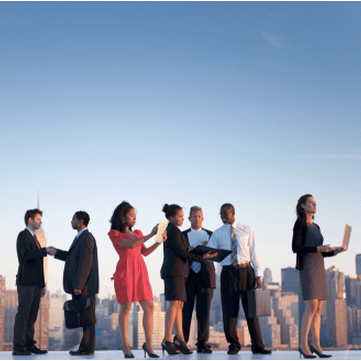 Meeting new people is hard. Regardless of how outgoing you are, it’s intimidating to find yourself in the middle of a networking session, especially as a young professional, recent grad or current student.

What do you talk about when you don’t have much work experience? How do you get them to like you? What if you say something stupid?

Here’s how to survive:

Remember That Everyone Is There For The Same Reason

The cool thing about networking events is that everyone is there in order to meet new people. It took me a long time to realize that even the established professionals in the room are there to meet people like you. They may be looking to hire for associate positions. They may be looking for a fresh perspective on emerging technology. They may just want to meet new people or give back to the groups that helped them launch their businesses.

It’s a lot easier to strike up a conversation with someone once you realize that no one is wasting anyone else’s time.

Whenever I find myself hesitating at a networking event, I set a goal for myself: meet at least two new people from different groups. With a goal in mind, I can’t just stand in the corner on my phone.

The best part about setting such a small goal is that it’s easily surmountable: if worst comes to worst, I can pop in for 15 minutes, chat with two people and duck out. However, by the time I’ve spoken to two different people, other people have usually joined in the conversation and the conversation is moving along on its own.

If possible, I like to be one of the first people in the room. A room with only one or two people in it looks much less intimidating than one with a bunch of people standing around conversing.

Time it properly and the two or three people that are standing around making small talk are usually glad to have another person there (“Oh! Hey! This might actually be a real event!”). As more and more people show up, they’ll be the ones who are prompted to open a conversation with you as they filter in.

Showing up early also usually gives you a chance to connect with the organizer of the event. Meeting the event organizer(s) is key: he or she often has a good idea of who is in attendance and can provide introductions to people that you may have otherwise never met.

Really, this “rule” boils down to “find someone that looks as or more awkward than you and talk to them.”

The only thing worse than being in a room where everyone is seemingly in conversation is trying to jump into a conversation that’s mid-swing. Look for odd-numbered groups of people where someone looks left out or single attendees looking around nervously and trying to find something to do with their hands.

Now that I’ve left college, I can no longer open a conversation with “What year are you?” or “What are you studying?”

If you’re really nervous, however, there are still a couple of topics to turn to in order to break the ice. I prefer to ask people about their hometown, current neighborhood or the university that they attended. Other people prefer to talk about books, food or sports. The important thing is to listen actively: there’s no point in asking a person questions when you’re not paying enough attention to follow-up.

I like to think of a networking session as low-stakes informational interview. If you play your cards right, you’ll walk away with more information about a company or industry that you’d like to know more about, a new potential professional contact and a nice little ego boost to boot.

Thinking of an event as an informational interview also keeps me in a “professional” mindset. As such, remember to:
Dress intentionally — If there isn’t a dress code, I shoot to dress “one step up” from what I’d usually wear to work. That can be as simple as throwing a nice blazer on over my work clothes (read: collared shirt and jeans) when I head out the door in the morning.

Not drink (too much) — Yes, there will probably be free alcohol. No, you shouldn’t overindulge. Know your limits and aim under them. Have a “go to” drink and stick to one every hour.

Be honest — Just like in a typical interview, overstating your experience or abilities can lead to some ugly situations down the road.

This is probably the most important step. After all, what’s the point of “networking” if you don’t put in the time and effort to actually build out your network?

Take the time to follow up with everyone within a day of the event. Then, once you’ve established a connection, make sure to periodically reconnect (some people suggest once per month, others suggest to wait longer) to keep your relationships as strong as possible.

Networking is like any skill: you get better the more that you do it. Over time, you’ll come to internalize goals, conversation points and responses so that you can walk into a room with confidence.

Put your network skills to the test: come to GenFKD’s Millennial Success Conference on Saturday, November 15th in Fairafax, VA. You can also find me at “Lets Grab A Margarita and Talk About Social Media” event on Wednesday, December 3 at Agave NYC.

Bold @BoldTV
12 hours ago
Should Schools Teach Financial Literacy? This Would Be Key - https://t.co/DAUVuzgITA
View on Twitter
0
0