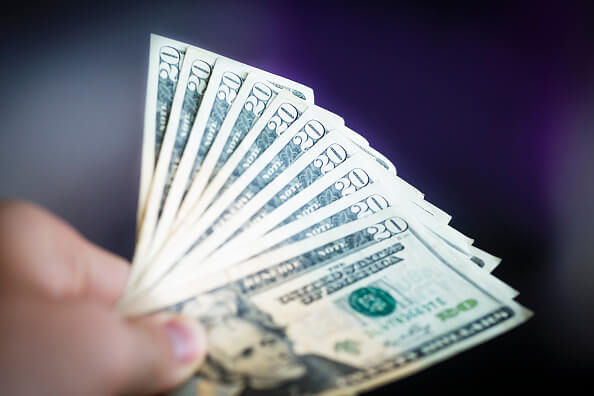 If you want to be financially secure 30 years from now and you haven’t opened a Roth IRA, you’re shooting yourself in the foot.

These words of wisdom have come from anyone that is comfortable with their money, including financial planners, economists and any website offering financial advice. Although I am, by no means, comfortable with my current financial situation, I still wholeheartedly believe that this is the safest bet for a retirement fund.

How much do I need to open an IRA?

The sweetest aspects of a Roth IRA are that it is easy to fund, somewhat easy to manage, and provides great tax benefits. In another post, Emily Pirt gives you the Roth IRA 101. However, what the article doesn’t mention is what people fear the most: “How big a pile of money do I need to have to fund Roth IRA?”

Answer: With most IRAs (both traditional and Roth), there are no minimums. So, if you have $25 you’re willing to stash away for retirement, that’s enough to start your retirement account. Yeah, crazy, right?!

Some brokerages suggest a minimum only because then you would have enough money to play with and purchase stocks or ETFs. But, that is not required.

We make less, but spend more

The GenFKD millennial report highlights that 69 percent of us would like to invest, but we don’t because “we don’t have the money.” Is it really that bad?

Reports sympathetic to the economic plight of our generation seem to think it is. We are making less than our previous generation counterparts did in 1975. We’re also riddled with debt, don’t own our homes and face stiff competition in the labor market. But, bully for us, we’re more educated!

Despite our economic woes, we must admit that we spend frivolously on convenience. Just think of the countless apps available to us solely to make buying stuff more convenient. Amazon, I love you, but you make it so easy to eff my budget. 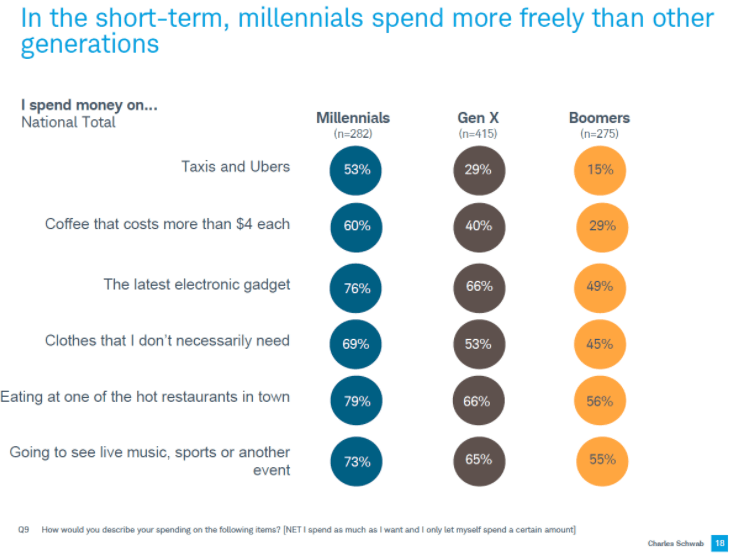 A recent Wealth Index compiled by researchers at Charles Schwab showed that at least 60 percent of millennials are spending more than $4 on coffee, 79 percent will splurge to eat at the hot restaurant in town and 69 percent or buying clothes they don’t need — much more than previous generations (who made more money, by the way).

Only 18 percent of millennials have a retirement account outside of work, which would include accounts such as an IRA. As the modern economy continues to transform largely into a gig economy, having an individual retirement account will be crucial to your financial security.

With a Roth IRA, financial well-being of your gray-haired years will not be compromised by who your employer is and, importantly, what the tax situation looks like during those years. As both the federal government and state governments go further and further into debt, it is likely that our taxes will increase in the future. With a Roth, it’s no worries.

Get involved with investing

By throwing as much money as you can into a Roth IRA, whether it be $15 per month or the max of around $450 per month, you can also get some practice with investing in stocks. The head of Schwab Investor Services is right when she says, “It doesn’t matter whether you have a lot or a little — what matters is that you think about the money you have as your wealth, and that you pay attention to it. Being engaged is the only way to reach your personal goals.”

This post plays to a similar tune a GenFKD colleague recently touched on. He rightly points out that due to the 2008 recession, “Many millennials might be wary because they view the stock market as a risky investment.” But, close to a decade later, we’re alive and the stock market keeps reaching record highs.

To be sure, there’s a finance theory of the stock market called the “random walk theory” which highlights how unpredictable the stock market can be. However, in the long run, the random walk is more like a drunken walk home after night pounding some canned wine. We stumble and take random detours, but eventually, we wake up and we’re home. Home, meaning we see 7 to 15 percent returns on our investments.

Stop making excuses and open a Roth IRA. You can put up to $458 per month, or $5,500 per year. Starting now will make you a baller later. So, quit your lattes, frappes, and food delivery and throw that cheddar into your future.

Bold @BoldTV
8 hours ago
#BritneySpears recently came out to the world stating she wants to end her conservatorship. Is it time to #FreeBrittney? Also, if you don't know what Conservatorship is, read all about it here! https://t.co/dy3apOEqjc
View on Twitter
0
1

Bold @BoldTV
10 hours ago
How much do you use your eyes? https://t.co/ZS3BMgkxoE
View on Twitter
0
0