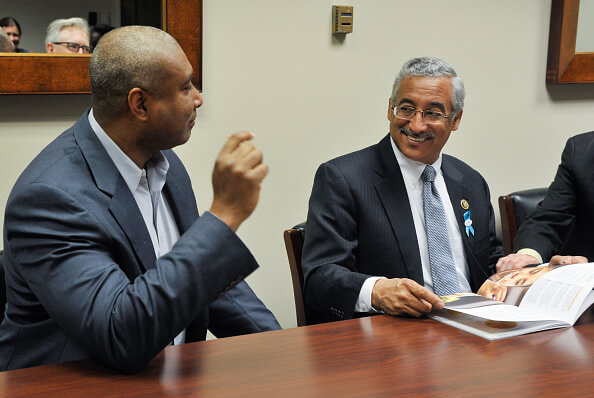 WASHINGTON, DC - MAY 20: NAMM member Bernie Williams speaks with Rep. Bobby Scott(D-VA) in the Longworth House Office Buildingas part of "Music Industry Leaders And Artists Drum Up Support For Music Education On Capitol Hill" event as part of Namm's D.C. Fly-in on May 20, 2015 in Washington, DC. (Photo by Kris Connor/Getty Images for NAMM)

The way the moving parts of government, unknowingly, work against each other contributes to the plight of the FKD’d millennial.

Can you blame them?

Earlier this year, members of Congress introduced a bill called the “Opening Doors for Youth Act 2017.” The bill is intended “to provide at-risk and disconnected youth with subsidized summer and year-round employment and to assist local community partnerships in improving high school graduation and youth employment rates, and for other purposes.”

The bill rightly states that “nearly 5 million youth ages 16 to 24 are out of school and unemployed, leaving them disconnected from the systems and institutions critical for developing the building blocks of independence and self-sufficiency.” They further describe that most of these kids come from communities of color.

The bill has more than 50 co-sponsors in the House of Representatives, as well as support from a bunch of nonprofit groups that aim to help young people and businesses that are interested in furthering the cause.

The only thing holding this bill back is that they have yet to find any support in the Senate, but Democratic Rep. Bobby Scott from Virginia has “vowed to push forward in continuing to seek a Senate sponsor.”

The bill goes on to show the economic impact of these “opportunity” youth. Unsurprisingly, they will earn less in their lifetimes than the average worker. In fact, according to 2012 “Economic Value of Opportunity Youth” report, $392,070 less.

Failing at getting these kids job and educational opportunities not only will result in distancing themselves from reaching the American dream but it also will put a damper on the economy with losses in overall productivity. The bill cites another report that also finds these kids costing $26.8 billion in government spending on healthcare, public assistance and incarceration.

Despite the talent these kids have, it remains untapped because the access to entry-level jobs are limited. Entry-level jobs are important for young kids as it allows them to garner the skills, experience and credentials necessary to transition into the labor market and be productive humans in our society.

Additionally, it’s important to make sure these kids have access to these opportunities because “when young adults do well, communities do well.”

How it plans to help

The bill plans to dole out $5.5 billion dollars to fund programs and organizations that supposedly keep up with the changing job landscape, in the form of summer and year-long employment, and help these kids acquire the necessary skills to get into the labor force. A portion of that cheddar also will go to help employers bring on these kids into entry-level jobs.

Pressing the gas with the emergency brake on

These efforts coming from Congress are well-intentioned, no doubt. It’s coming from a good place in their hearts. Further, it’s received support on both sides of the aisle, from at least a dozen states.

But, minimum wage hikes are in season, which is unintentionally hiking the very barrier this bill is attempting to climb over.

Without harping on minimum wage, which also comes from the compassionate side of these politicians, it makes it hard for kids — especially low-skilled or “disconnected” youth — from obtaining these entry-level jobs. With the push to increase the minimum wage to historic highs in cities across the country, especially in cities where most of the job opportunities for disconnected teens lie, this bill will need even more resources to achieve the desired outcomes.

It’s like trying to make the car move by pushing down on the gas pedal with the emergency brake engaged. For the increasing amount of you who are opting to not drive these days, most drivers have made that mistake, and it’s quickly noticeable — you don’t get very far.

The bill and minimum wage-ordinances both deserve praise for their sympathetic roots, but their simultaneous outcomes are screwing the very people they aim to help. There is little doubt that minimum wage increases, though the debate is still fierce, have a negative impact on employment. Arguably, the impact is much higher for the opportunity youth this bill is trying to subsidize.

The dollars being funneled into the organizations and businesses that help these kids get the experience and on-the-job training could likely be replaced by just letting employers hire these teens at lower wages. Allowing employers to pay teens, and low-skilled labor in general, lower wages might offer a more natural way of achieving the very outcomes they’re looking for.

But, that would make too much sense, and it’s heartless.