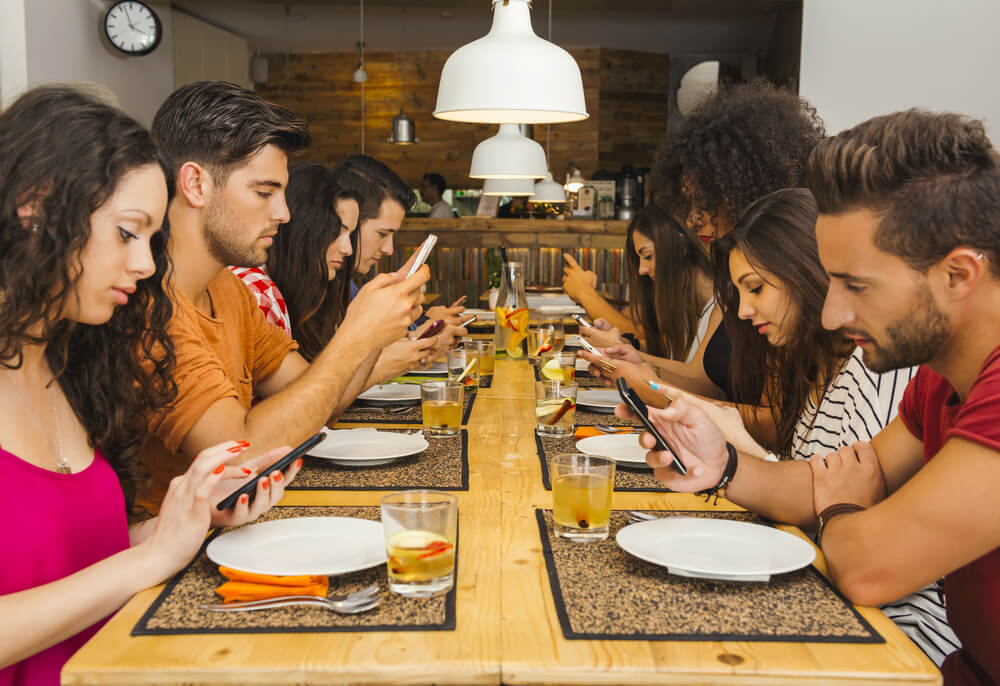 ten young people sitting at a dinner room table all on their phones.

Ah, the teen years. Worrying about if that guy or gal likes you, what your friends think of you, and if they’re talking behind your back. Worrying about what Becky said to Tom. And what Tom said to Mrs. Robinson. Your body is changing, and your moods are erratic. Plus you are super insecure about how you look … and homework sucks. Suffice it to say that this period in life is one of the most difficult. — and studies show that social media is only making it worse for insecure, anxious teens.

The questions that used to remain, thankfully, ambiguous and unanswerable in ‘the old days,’ are now measurable and quantifiable by your friendly social media app. Am I popular? Am I cool? Am I liked? Those questions are being answered —- at least for adolescents — by their friends’ list, the amount of awesome comments you get on your posts and by your “like” quota, respectively. So, it is easier than ever to tell yourself “No. No I am not popular, cool or liked.”

Likes, comments, tags and friends: Teens appear to be more conscious about these things than ever before, more than millennials were even. Teens are especially worried about things like how long it takes to accumulate “status markers,” and what their “follow ration” is (i.e. how many people you follow versus how many people follow you). Instagram, Facebook and SnapChat are far more than simply a virtual place to hang out these days. They can be a snarling pit of judgment and self-loathing. At least, that is what new research says. Not only are these platforms quickly becoming — if not already have become — the benchmark by which our nation’s teenage population is judging themselves. The research show that overuse of platforms such as Facebook might lead to mental health issues, particularly in the formative years!

There is some good

Social media doesn’t have to be all toxins and tragedy for their users. In fact, it can lead to deeper connections with friends and an easy way to communicate with peers (who might become friends one day!). Facebook, Instagram and Twitter can offer things like belonging and support. Healthy usage can be beneficial and even curative. However, for those who “lose themselves in the trap,” social media can be overwhelming and stress-invoking. What with curating your profile, making sure that you keep content fresh and interesting, and, most importantly, combing through the myriad of profiles that showcase lives that appear better than yours.

“The hyper-vigilance that some adolescents feel forced to maintain online is anxiety-provoking and hijacks time away from more important things like homework and sleep,” said Catherine Steiner-Adair, a clinical psychologist in Chestnut Hill, Mass., and the author of “The Big Disconnect.”

It used to be that home was a respite for the hardships and trials of social interaction. For today’s teens, this is hardly ever the case. In fact, at home they have more time to better devote to brutally sizing themselves up in relation to their peers.

The study is out of the University of North Carolina at Chapel Hill and was published in March by Jacqueline Nesi. The study was published in the Journal of Clinical Child & Adolescent Psychology, and was titled “Digital Status Seeking.” Researchers followed 716 adolescents, ages 15 to 18, for one whole year. What they found was that those teens who more engaged in social media were more likely, a year later, to engage in “risky behavior such as substance abuse and having an increased number of sexual partners.” The theory is that these teens “[were] more willing to engage in behaviors that [would] make them appear popular.”

Adolescent girls are especially susceptible to such anxieties, according to a second study. A similar, longitudinal study was conducted in the U.K. The study was published in the journal BMC Public Health in March of this year, and followed 10,000 adolescents for five years. The adolescents’ social media habits were tracked from ages 10 to 15. The study found that 10 percent of the girls reported spending one to three hours on social media a day at age 10! While, by age 15, that number had increased to 43 percent. The 10-year-old girls who had used social media for more than one hour a day were found to have the highest risk of emotional and social problems as they aged.

The study estimates that the findings may be linked back to the tendency for girls to use social media to compare themselves to other girls, thus lowering their self-esteem and leading to self-loathing, while boys of the same age were found to do similar things, it was less prevalent. Boys spent more time playing games like online poker than they did making social comparisons, said lead researcher Cara Booker of the University of Essex.

An additional study was published in the Journal of Research in Adolescence, and it looked at the effort that goes into cultivating online identities. The group of participants was composed of 27 females and 24 males ranging from ages 12 to 18. With both genders, the need to appear “interesting and likable” was pervasive, but with girls, a third quality was added: the need to appear “attractive.” Girls were also found to be more strategic when it came to building a well-curated online social identity. They posted at peak hours of traffic, and actively enlisted friends to like and comment on their statuses and posts in order to boost their popularity. Girls described the process as “a lot of work,” but none of the boys described it that way. Boys also didn’t expect friends to comment or like their statuses, and they didn’t get upset when friends did not.

A pilot study out of Canada looked closely at the habits of 110 teens ranging from ages 13 to 17 .  The study found that 70 percent engaged in one or more “deceptive like-seeking behaviors,” such as purchasing 500 “likes” for $6.99 through websites or using programs that offer “digital nose jobs.”

“We know from previous research that social validation and belonging is so important for adolescents, but when you are getting ‘likes’ by buying them or based on an image of you that’s not real, what is that doing to your self-esteem?” she asked.

Too many young people are judging themselves based on how they come across, and look, in their social media profiles. Not only this, but it appears that they are even willing to pay for such online prestige, even if it is faux prestige. Although almost every generation has looked upon their juniors and said “shame,” in the case of social media with today’s youth, it seems that it is severely damaging their mental health. Steiner-Adair said that “parents need to start taking as much interest in their teen’s online life as they do their real one.”

A red alert should go out nationwide on this one, y’all.