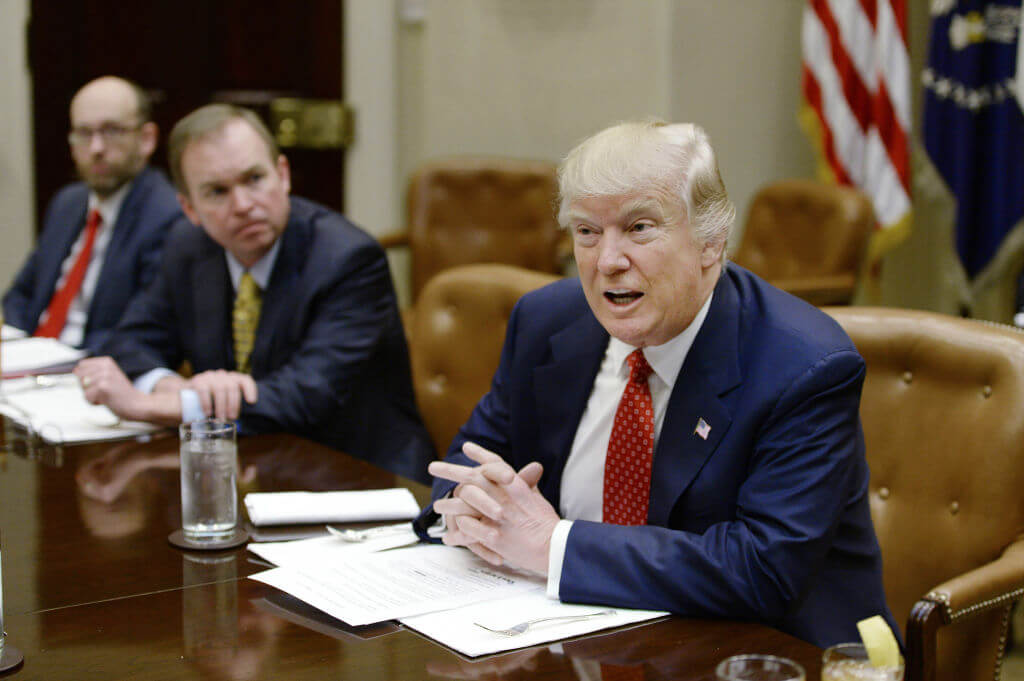 The proposed federal budget for 2018 is catching a lot of heat. The Trump budget proposal seeks to spend $4.1 trillion, despite cuts to a slew of agencies. This hefty budget, which will be coupled with some substantial tax cuts, is betting on a wild overestimate of three percent growth to balance it out.

With this proposal, the Trump administration is hoping to slash taxes, throw cheddar at national defense, roll back burdensome regulations and cut back on safety net spending for the poor.

The Trump administration believes they can do all this while simultaneously balancing the budget in 10 years.

Corny, I know, but roll with me here for a sec. For the budget proposal to work, the United States would need to achieve an economic growth rate of three percent by 2021. And that’s a joke.

Then again, who am I to say? Or, for that matter, other economists. When making predictions, all we have are historical data and pattern trends.

Economic growth has been on a downward trend since the end of the 1960s, regardless of what the budget proposal claims. Don’t believe me? I did the math using data from the Federal Reserve. 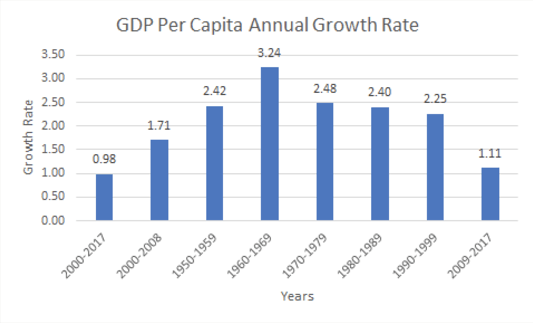 Despite the rapid population growth of the `50s and `60s, economic growth per person shot through the roof. The economic landscape was slightly different then:

The same can’t be said of today’s economy. The most important factor that led to the growth was the fact that the United States had economic leverage.

Now, emerging economies like China and India, along with the added members to the Organization of Economic Cooperation and Development (OECD), have made the global competition slightly more than stiff.

This is a good thing if we think people outside the United States deserve an increased quality of life, (if you’re unsure, they certainly do). But the truth is, it isn’t as easy for the US to compete.

Even during the housing boom in the years prior to the financial crisis, we still didn’t see the three percent growth the Trump administration is predicting. Though the `90s saw a blip where we had high levels of growth, it quickly dwindled.

We may see the economy grow at three percent at some point in our lives. However, even if we see a percentage increase of 10 percent one month, that doesn’t mean that it’s sustainable. A short-lived shock can cause growth to rise for a second, but would have virtually no effect in the long-term.

Additionally, it’s hard to influence the long-term growth rate. When it does increase, it happens unpredictably. Or, as Nassim Taleb would call it: “black swans.”

Events like the invention of the cotton gin, the assembly line, the atomic bomb, the Internet or Google, and economic shocks like the ’08 financial crisis were all black swans that had substantial impacts on productivity and economic growth.

What’s more, is that the rise in global economies contributes to our smaller growth rate. This means people are being lifted out of poverty, jobs are being created, and there isn’t as much global dependency on the United States.

If we don’t hit this predicted growth rate, we may very well see the opposite of a balanced budget—somewhere in the arena of a trillion dollars in deficit spending.

In this article:federal budget, trump

Bold @BoldTV
9 hours ago
Should Minimum Wage Workers Make 15 An Hour? The Fight for 15.
https://t.co/5wrHWnTvPn
View on Twitter
0
1