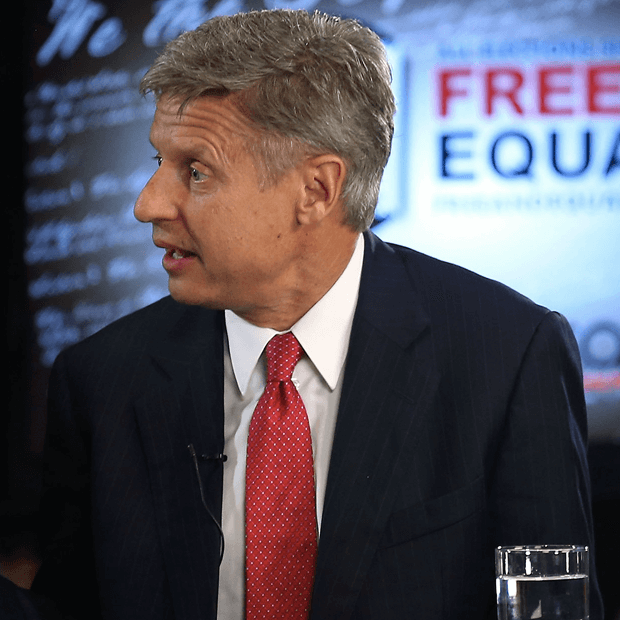 In January 2016, Gary Johnson, the former governor of New Mexico, announced his bid as the Libertarian Party’s nominee, kicking off a flurry of people saying, “Great. Who is Gary Johnson?” But now that Trump is the last Republican man standing, Johnson’s viability as an alternative is gaining steam.

Since Reince Priebus announced that Donald Trump is the “presumptive GOP nominee,” Johnson’s candidacy has begun to attract heightened media attention. And this isn’t the first time that’s happened.

The former two-term governor ran as a Republican in the 2012 primary elections, but quickly dropped out to run as a Libertarian nominee in the general election instead. After announcing the switch in late 2011, Johnson reiterated his fiscally conservative, socially liberal stance.

“I successfully governed as a Libertarian in everything but the name, and I am running for president as a Libertarian,” he said. “Just the speculation that I might run as a Libertarian has garnered more national media attention than I ever received as a Republican candidate.”

In the 2012 general election, Johnson won less than one percent of the total vote, according to the Federal Election Commission. Even so, this race has the potential to be much different from the previous one. If anything, that campaign experience is becoming significantly more relevant now that the general election is inching closer.

On his official campaign page, Johnson calls himself the “most fiscally conservative” governor in the country. He also proudly stated that he vetoed over 750 bills during his time in office, continuously cut taxes and noted that New Mexico was one of only four states with a balanced budget when he retired. Johnson has consistently focused on this fiscal conservatism, which may help him draw Republican voters who aren’t quite sold on Trump.

Gary Johnson on the Issues | InsideGov

When it comes to social issues, Johnson supports a hands-off approach on behalf of the federal government. On the topic of abortion, for example, he has said that he believes a woman should have the right to choose up until a certain point in the pregnancy. He also believes that private institutions themselves should decide whether or not they want to fund birth control. If a governing body is to make a decision, he’s argued that states, not the federal government, should work out the specifics for themselves.

As for drug use, Johnson stands by his belief that marijuana is safer than alcohol and has advocated for its legalization. He’s also suggested that substance abuse be viewed as a health concern as opposed to a criminal issue.

Role in the 2016 presidential election

If Johnson plays his cards right, he could attract both Republican and Democratic voters in the upcoming general election.

On the Republican side, numerous establishment politicians including Jeb Bush, Paul Ryan, and Mitt Romney have said that they will not, or are not ready to support Trump. The same goes for voters who believe the billionaire’s candidacy is destroying the GOP. In an interview with Chris Cuomo on CNN’s New Day, Johnson expressed his own disapproval of the “presumptive” GOP nominee.

“With regard to Trump, he’s saying some things that I just think are ridiculous and would disqualify any other candidate,” Johnson explained.

For the Democrats, Johnson could also represent an alternative to Sec. Hillary Clinton. He’ll especially be in luck if he can garner support from Sen. Bernie Sanders’ network of millennial voters, whom Clinton hasn’t been able to reach. In fact, Johnson told CNN that of all the 2016 presidential candidates, he identifies most with the Vermont senator.

More than ever before, Americans are beginning to identify as Independents as the two-party system grows increasingly polarized. For proof, look no further than a Gallup poll from 2014, in which 43 percent of Americans identified as Independents.

Though the conditions seem ideal, a third-party candidate has never won the presidency in the history of the United States. Seeing as this election has had its fair share of quirks, however, nothing is impossible. Expect to see Johnson’s name pop up more frequently in news reports as the primary elections come to a close.