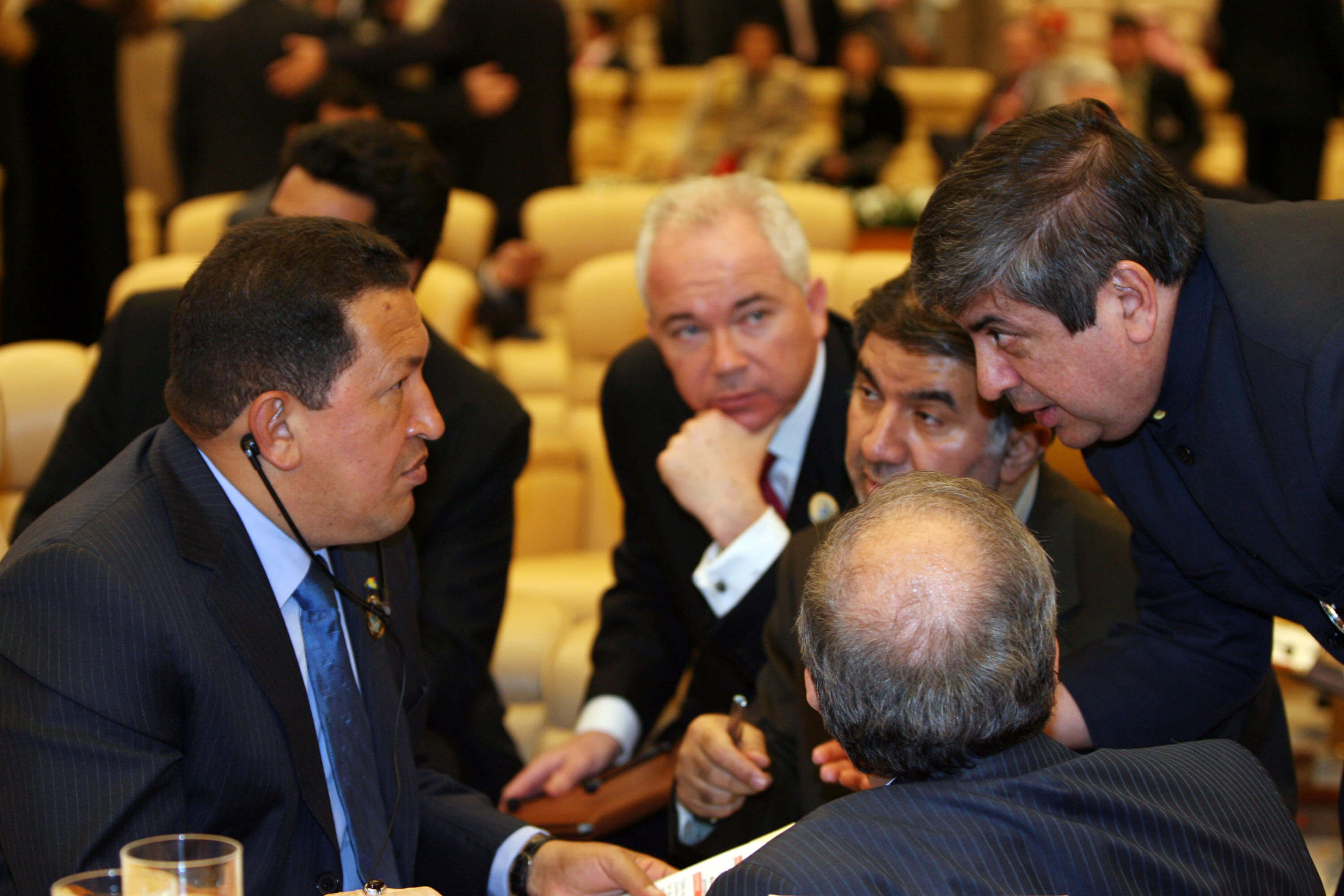 RIYADH, SAUDI ARABIA- NOVEMBER 18: Venezuelan President Hugo Chavez (L), talks to the Iranian delegation at the closing of the Third OPEC Summit , November 18, 2007 in Riyadh, Saudi Arabia. Iranian President Mahmoud Ahmadinejad has announced plans for discussions with Arab nations about plans to enrich uranium in a neutral country outside of the the Middle-Eastern region, such as Switzerland (Photo by Salah Malkawi/ Getty Images)

To the uninitiated, one might think an oligopoly is just the gibberish, typo-version of “monopoly.” If this is you, don’t worry, I thought the same thing in my early days as an econ pleb.

An oligopoly occurs when only a few companies share the majority of the market for a product. There really isn’t a magic number that dictates how many companies can make up an oligopoly, but there has to be a small enough number that one firm’s actions will drastically affect the others.

So, in a sense, an oligopoly is similar to a monopoly in terms of market prominence and power, but it differs in the number of actors involved in market control.

Capitalist markets favor competition, but oligopolies are an exclusive club all to their own. This is because of the industries they are typically found in, which have high barriers to entry.

This means that the average person or entrepreneur will find it hard to enter into the market because there are specific requirements that must be met. You can think of these “requirements” as additional costs, ones that make it hard to start a competitive business in that field.

To that end, oligopolies are typically common in things like utility companies (i.e. cable, oil, gas and electricity), because the prospective new business would be required to build telephone lines, install pipes, build oil rigs, etc.…all things that cost beaucoup bucks for the average person to install.

Since there are only a few companies controlling the market, oligopolies are oftentimes defined by mutually beneficial interactions.

The businesses can’t act independently like lone wolves because the actions of one company can drastically affect the others in the market. For this reason, companies in an oligopoly typically act interdependently, taking into consideration how the other businesses will act and be affected.

Because there are a few companies that dictate the price and supply for the market and not just one, oligopolies often see an agreement among market powers if changes are to be made to the status quo. If one company wants to increase prices, it better make sure the other oligopoly companies are also on board. If not, then customers will flock to the others because they will be able to get the same product for less money.

A common example of oligopolies put into practice is the prevalence of cartels. Cartels get together and coordinate prices in order to exclude competitors from entering the market. You can think of cartels as a super exclusive club that dictates how the market for a particular good is run. And if you’re not a part of the group you better watch your back because odds are that cartel will be using the ace up its sleeve to push you out of business.

Oligopolies are able to force newcomers out of the field by making prices so low that newcomers cannot make a profit upon entry. This is called predatory pricing. Multiple companies can get together and collude (a.k.a. make deals) to set prices at a certain level and run others out of business.

When the oligopoly companies continue in a formal partnership together, that’s when the collusion turns into a cartel. The most infamous example of a cartel is the Organization for Petroleum Exporting Countries (OPEC), which sets the price for a large portion of oil. OPEC utilizes the cartel operating procedures noted above and is currently trying to oversupply the oil market in order to crowd out competition.

Why not all oligopolies turn into cartels

If oligopolies are operating at a constant standoff with one another, how does anyone get anything done? Easy: game theory.

Game theory is a fancy way of describing how someone strategizes and anticipates the moves of another player. This is uber important with oligopolies, because each move has to be carefully planned out before it is executed.

Thankfully, oligopolies allow businesses to separate themselves using tactics other than price adjustment. The structure of an oligopoly system places high value on product differentiation, advertising, branding and public relations to stand out from the crowd and increase market shares.

Customer loyalty and reputation can carry a company a long way in an oligopoly. If they have a strong brand, the company can differentiate itself based on service alone and attract new swaths of customers without having to adjust a penny on their prices.

Let’s take our cell phone carriers as an example. Verizon, T-Mobile, Sprint and AT&T each have significantly different brands, marketing campaigns and social media presences. They all claim to have “the best” service, but, more often than not, we stick to the company that attracts us as having the best reputation and reliability based off of a mixture of branding, advertising and public relations moves.

Because businesses are able to distinguish themselves using the techniques referenced above, these oligopoly companies are selling differentiated products – something that makes it difficult for a cartel to form.

Cartels deal with the producing and selling of commodities, goods that are largely homogenous, like oil, diamonds or produce; regular oligopolies, on the other hand, have the freedom to sell differentiated products.

Wrapping it all up

We might think of collusion as something that happens once oligopolies are already established, but it is actually the basis for how they are formed. Remember, the industries that oligopolies appear in have high barriers to entry, and, because the struggle can be very real in the outset, businesses begin to collude to reduce competition and make more money. Eventually, only a handful of companies are remaining and – voilà – an oligopoly is formed.

Oligopolies can distort markets by altering with traditional supply and demand.

While a cartel’s dirty deeds might not seem fair, it’s important to note that a regular oligopoly still manages to promote competition between its business adversaries. This competition makes sure that the businesses play fair and ultimately benefits the consumer with better prices and some pretty friggin’ hilarious Super Bowl commercials.

In this article:Economics, fkd 101, literacy, oligopoly