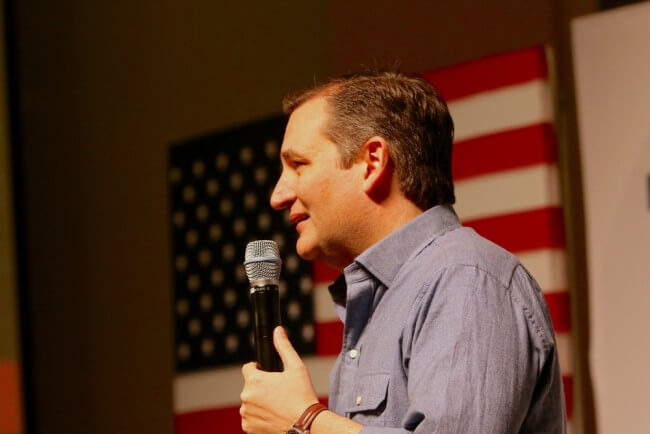 This campaign season is shaping up to be one long episode of Keeping Up with the Kandidates, and last night’s Iowa caucus didn’t disappoint.

From upsets on the Republican front to a neck-in-neck tie between Democratic leaders Hillary Clinton and Bernie Sanders, Iowa proved that the polls don’t matter and boring election coverage makes for some surprisingly great TV.

Texas Senator Ted Cruz snagged the first place trophy with 27.6 percent of the vote against Trump’s 24.3, sending the reality star into a tailspin of regret after not showing combover at last week’s GOP debate.

Cruz secured his win over Trump in a traditionally evangelical state in which he campaigned aggressively for weeks, while the longtime poll leader pouted and staged a protest rally. One could say Iowa was primed for the senator’s platform.

Nonetheless, Cruz’s win speaks to the strength and professionalism of his campaign efforts, while poking holes in Trump’s once invincible facade – a theme that has come to define the real estate mogul’s run for the White House. Trump’s political livelihood now rests heavily on his performance in New Hampshire – a state that lacks the evangelical support essential to Cruz’s campaign – where he’ll have the chance to reinstate his dominance or risk losing momentum indefinitely.

But the real Cinderella story of the GOP is, of course, Florida Senator Marco Rubio. After garnering 23.1 percent of the GOP vote, Rubio has officially positioned himself as the viable moderate candidate, declaring, “it’s now a three-person race” in TIME magazine.

Rubio has consolidated considerable support from the GOP establishment, which he hopes to capitalize on in the New Hampshire primary in February, and then ride out until the nomination. “So this is the moment they said would never happen,” said Rubio in an impromptu victory speech following the results. “When I am our nominee, we will unite our party, we will grow our party and we will defeat Hillary Clinton or Bernie Sanders.”

The remaining 1,897 GOP hopefuls – including Jeb Bush, Chris Christie, Rand Paul, John Kasich, Ben Carson and Carly Fiorina – are hanging on by a thread heading into New Hampshire, while Mike Huckabee officially dropped out of the race via Twitter.

Feeling the Bern From the Iowa Cornfields

Clinton’s camp was quick to declare her .3 percent lead a clear “win” over Sanders – even as votes were still being counted for clarification – while Team Bernie argued that it was a “virtual tie.”

Point three percentage points aside, a virtual tie is definitely a cause for celebration over at Camp Sanders. Compared to the dismal chance of success at the start of his campaign, a .3 percent loss is a monumental win in his book. Sanders is also expected to fair well in his neighboring home state of New Hampshire, which could give him the momentum he needs to sustain his campaign through to nomination.

As for Team Hillz, the former senator and co. are “breathing a big sigh of relief” following Monday’s vote. One can assume that the close call is triggering past memories of a certain 2008 campaign gone south, when one Barry O abruptly cut off her leisurely cake walk to the nomination.

On the bright side, she did technically beat Sanders in a very white state – a demographic that is essential to Sanders’ success due to his struggle to reach non-white voters. This victory, although small, could be a sign of security for the the former first lady.

If the 2016 Iowa caucus taught us anything, it’s that pre-election polling isn’t always accurate. And that the 2016 election is definitely going to be interesting. Follow along with us on Twitter next week as we live-tweet the New Hampshire primary.