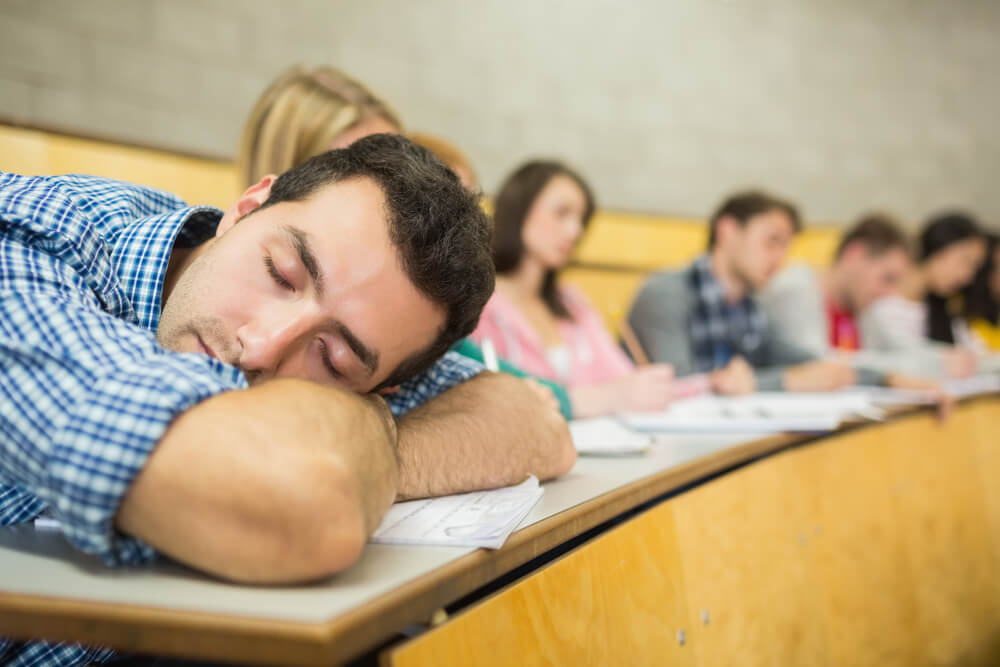 sleeping student at his desk

In 2017, nearly 20 million students enrolled in college. The realities of high tuition costs, expensive textbooks and pricey dorms are preventing low-income students from enrolling, and many more from graduating.

Economics plays a big role in the college-completion crisis. A Pew research study revealed that two-thirds of young students stopped their education in order to support their families.

These trends are especially concerning for young people who want economic security. In today’s job market, earning a degree is often a necessity and not a luxury.

College completion is a problem in every demographic, but people with low-incomes are the least likely to finish college. The data reveals that the economic situation that Americans are born into is a strong predictor of college success. Only 33 percent of students who come from low-income families are expected to earn their degrees; compare that with the 56 percent of wealthier students who obtain their degrees.

The difference in graduation rates is shocking. Research from the National Student Clearinghouse revealed that only one in four students who graduated from a low-income high school completed college within six years.

The college-completion crisis is getting attention from big names in the public and private sectors. For example, Bill Gates, the founder of Microsoft, believes that colleges are failing to guide new students towards their dream careers. Gates pointed out that colleges aren’t doing their best to help graduate low-income, first-generation students or to prevent them from dropping out.

Survival of the wealthiest

No one wants to put a price on education, but college boards are already pricing a four-year education. Most middle-income and low-income students take out student loans to attend college, and the price of attendance is going up steadily year after year.

According to a Forbes study, the average student takes out at least $37,000 in loans, contributing to the national student debt of $1.5 trillion.

College prices can vary drastically. If you want to attend a state school outside of your state, expect to pay significantly more than state schools within your state.

Many lower-income students choose City Universities of New York (CUNY) because it’s more affordable and accessible than other institutions.

Only 28 percent of students, across all CUNY schools, are projected to graduate. Most community colleges suffer from low graduation rates as well. The Borough of Manhattan Community College’s graduation rate is only 17 percent.

State University of New York schools have a higher graduation rate, but there are a significant number of students who don’t graduate.  SUNY colleges’ graduation rates average between 60 and 70 percent.

Today, colleges mainly focus on enrollment rates. So, they eagerly accept low-income and first-generation students. However, they often don’t offer guidance to keep students on track.

Cheryl Hyman, former chancellor of the City Community Colleges of Chicago, improved the graduation rate iin Chicago, and established guided pathways for students. Her program, Reinvention, is designed to help disadvantaged students understand how their courses will help their career path.

Kennedy-King Community enrolls 90 percent more minority and low-income students than other Chicago colleges. The Reinvention program has improved its graduation rate. The new curriculum assists students with their courses, and instructs them on how these courses can lead to a career.

Colleges are facing pressure to improve their graduation rates. They have created specific scholarship programs to improve student outcomes for at-risk students, but often still fail to help them graduate.

The mediocre graduation rate is becoming a significant problem for future students who believe that college education can better their lives. To combat the issue, Reinvention is providing a structured guided path for students to transition into jobs.

Colleges need to refocus their policies to address disadvantaged students who are overwhelmed financially and socially at college. Hyman believes that more face-to-face interactions with at-risk students can help them stay on track. More personalized courses and engagement can improve the graduation rate.

Specific scholarships can help low-income students financially but it will require more engagement with struggling students to improve graduation rates. After all, disadvantaged students shouldn’t have their dream careers unravel in their first year.