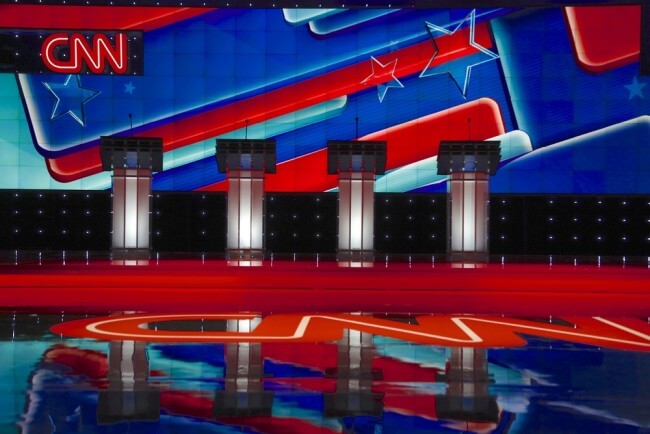 Tonight at 9pm, America will watch (and most likely drink) as eight Republican presidential candidates duel it out on national television in the fourth GOP debate this campaign season.

Live from the morbid Milwaukee Theatre in Milwaukee, Wisconsin, Fox Business Network and the Wall Street Journal will attempt to rectify CNBC’s disastrous moderating in October and maybe even pose some pointed economic questions (gasp!).

This time around, qualifying candidates will not get to make opening statements, but will have 90 seconds to answer each question with an additional minute for rebuttals. Each candidate will also be permitted to make a short closing statement when wrapping up the debate, according to Politico.

First on our agenda for tonight? Actual acknowledgement. More specifically, we want to be factored into the economic discussion instead of left on the sidelines. We want a strong economic leader that will have the interests of America’s largest generation at heart.

Between the $1.2 trillion in national student loan debt, the high millennial underemployment rate and stagnant middle-income wages, we have a very personal stake in our economy. This is reflected in the numbers: Some 50 percent of Americans aged 18 to 24 regard the economy as the most important issue, according to millennial marketing.

Despite being stereotyped as a politically disaffected generation, we are determined to see our economy thrive. Namely because these issues affect more than just our bank accounts; they send us back home in droves to live with mom and dad post-college. They keep us from buying a car, getting married, investing in the stock market or purchasing our first homes. These missed milestones hinder our country’s economic progress and plunge us deeper into national debt.

In the future, we want a well-paying job requiring a college degree for every college educated applicant. We want respectable wages that make the time and money spent earning a college degree worthwhile. We want to have a shot at paying off our $20,000 in student loans in under 10 years.

What can our 2016 contenders do? Come up with a viable answer to the student debt crisis that doesn’t involve spending billions of dollars and making false promises. We can reform our education system to promote, hone and foster the skills of the modern workforce. We can embrace and nurture our new economy rife with disrupting innovation.